Fred and I and four of our friends are currently sitting in the dining room of Fred's father's house (he owns a vacation rental in addition to his own house, and we are staying in the vacation rental) on the beautiful island of Kauai (in the northeastern part of the island called Anahola).

The sun has just risen, and Cole and David made French toast and sliced pineapples on the side. The sounds of the ocean and the birds are the white noise of the day. Perhaps later we will go inner tubing down the canals of an old defunct sugar plantation, or do a zip line through the jungle. This week is a great time to recharge our batteries and enjoy island life.

...Ah, I remember the days when Live Journal was filled with the voices of those watching for every piece of information on all things Apple. So far, not one post on the new/old/new again MacBook Pros or iPhone updates on my LJ friends list! Someone is dropping the ball!

I kind of expected the ruling from the CA Supreme Court today, even though I was trying to stay optimistic. The only good news to come out of this decision is for our friends who got married and won't have their marriages invalidated. This would also seem to be the basis for a strong case in the future of invalidating the rule overall. I love hearing the early fundies shouts to invalidate the marriages, because my thought is that only provides us more ammunition as to why we should all have the right.

I was not expecting the 6-1 vote. I thought it would be a closer split, 4-3. Justice Moreno seems to be the only one to gotten it right.

Looks like Fred and I won't be getting married after all. Well, at least, not for a while.

In the meantime, I'm settling in for a long engagement. They can't take that away from us. 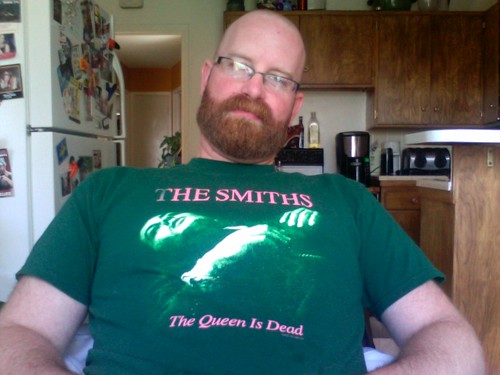 I wore this in honor of Green Shirt Thursday, and the fact that Adam Lambert didn't win American Idol last night. It seemed appropriate.

(Note: Frankly, I'm not all that upset about AI...I liked Kris, and this was the first finale in a long time where I was okay with either result. I only get sad about it when I think about how many people voted for Kris as an "anti-Adam" vote, but then quickly realize I voted for David Cook last year largely as an "anti-Archuleta" vote. Balance, people, balance.

Wow. Japan gets all the coolest stuff. And by coolest, I mean, the most batshit crazy, beyond super gay videogames.

If the musclebears with Wiis I know found this, they would literally wet their pants, and probably never leave the house again.

Except, you know, to go to the gym to keep trying to look like this...


My eyes are bleeding. From laughter.

That reminds me, I need to go to the gym.

I suppose I should write something about the cruise we just went on.

We are now 99 miles away from San Francisco driving on the 5, after a week spent on the Norwegian Star. There have been many wonderful trips taken in the past, spent with great friends, and this one was equally exceptional.

But this trip will always be more memorable for me than any other, because this was the trip where Fred asked me to marry him.

Going home is taking on an even sweeter tone.

Well, it's been a few weeks, but a lot has been going on.

* I did a 52 story stair climb a couple of weeks ago. It was a fundraiser for the American Lung Association, and a fireman buddy of ours was gathering a team of friends to tackle it. It was a lot harder than I thought it would be, because my ass is out of shape. But I did okay. It took me 18 minutes and 14 seconds to get up to the top, where there was a big spread of food and drinks for everyone. Fred did great, doing the walk in just over 16 and a half minutes. I didn't really do much fundraising for it, but I got a few good bids in from a couple of friends I mentioned it to last minute, and met my goal. Really, the goal was to do the climb in the first place, so I was proud of myself. I'll do it again next year, and hopefully make it up in 17 minutes.

* I am still doing massages at Bearracuda while finishing up school. I am just a few requirements away from getting my certification and licensure, but because I missed a specific class when I was sick a few weeks back, I can't retake it again until early June. So either way, I have about a month and a half to finally complete this part. I've been finishing up my practicums and I'm finally on track. It's been a bit frustrating not being able to truly focus on school when I have a regular paying job that keeps me from giving it 100%. Some days, I feel like I'm getting better at massage, and then I lose my faith that I'm getting better because I don't get to practice enough. But I'm not giving up. I enjoy the work a lot.

* Saw I Love You, Man, Monsters vs. Aliens and Observe and Report. All good fun. OK, the latter was really, really dark good fun.

* Fred and I leave in the morning with some friends for a week on the Lazy Bear cruise to Mexico, and we are both SO looking forward to it. I'm a little nervous about forgetting something, or motion sickness, but I need this vacation BAD. We both do.

That's all. I just didn't want to go another couple of weeks without posting. Back in a week and a half!

An anonymous reader asked, "What drew you to Fred, and how has he differed from past partners?"

The short answer? One word: ( Collapse )

I didn't get to all of my questions this month, sadly. I still have a couple more, which I will try to get to in the next couple of posts. March isn't the only day for answers, after all.
Collapse